Life in a Human Zoo 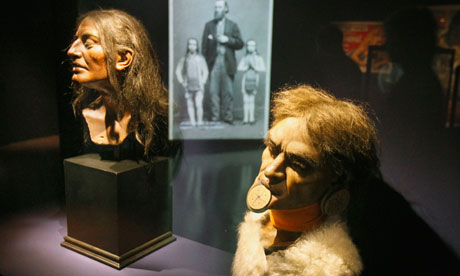 Models of heads of Botoduco men on display at the Quai Branly museum in Paris. Photograph: Remy de la Mauviniere/AP

Half-naked Africans made to gnaw bones and presented as “cannibals” as they shivered in a mock tribal village in northern France; Native American children displayed at fairgrounds; families from Asia and the South Pacific behind railings in European zoos and dancing Zulus on the London stage.

Paris’s most talked-about exhibition of the winter opened on Tuesday with shock and soul-searching over the history of colonial subjects used in human zoos, circuses and stage shows, which flourished until as late as 1958.

Human Zoos: The Invention of the Savage, curated by former French international footballer turned anti-racism campaigner Lilian Thuram, traces the history of a practice which started when Christopher Columbus displayed six “Indians” at the Spanish royal court in 1492 and went on to become a mass entertainment phenomenon in the 19th and early 20th centuries.

Millions of spectators turned out to see “savages” in zoos, circuses, mock villages and freak shows from London to St Louis, Barcelona to Tokyo. These “human specimens”, and “living museums” served both colonialist propaganda and scientific theories of so-called racial hierarchies.

The exhibition at Paris’s Quai Branly – Jacques Chirac’s museum dedicated to once-colonised cultures – is the first to look at this international phenomenon as a whole. It brings together hundreds of bizarre and shocking artefacts, ranging from posters for “Male and Female Australian Cannibals” in London, which was the world capital of such stage shows, to documentation for mock villages of “Arabs” and “Sengalese”, or juggling tribeswomen in France, which was renowned for its extensive human zoos. Thuram, who was born on the French Caribbean island Guadaloupe, said the exhibition explained the background of racist ideas and “fear of the ‘other'” which persisted today.

“You have to have the courage to say that each of us has prejudices, and these prejudices have a history,” Thuram explained. He said he was appalled that Hamburg zoo still had sculptures of Indians and Africans at its entrance, a sign that humans as well as animals were on display.

The exhibition reflects a trend in France to re-examine the exploitation of people for entertainment. The recent film Black Venus by acclaimed director Abdellatif Kechiche told the 19th-century story of Saartjie Baartman, a Khoikoi woman from South Africa, who was displayed in London and Paris as the “Hottentot Venus”. Londoners derided her as “Fat Bum”.

In 1906, Congolese pygmy Ota Benga was exhibited in a cage at the monkey house at New York’s Bronx zoo, causing a controversy before he was put in an orphanage for “coloureds”. He later shot himself. A hairy woman from Laos, known as “Krao”, was exhibited at the end of the 19th century as “the missing link” between man and orangutan.

William Henry Johnson, an African American child with a small cranium, was bought from his parents aged four, exhibited in a hairy suit and made to grunt. The show was titled What Is It?

The exhibition traces the lives of up to 35,000 people put on show in mock tribal scenes and taken to villages or zoos. In 1931, the great-grandparents of Thuram’s World Cup team-mate Christian Karembeu came to Paris from New Caledonia. They considered themselves ambassadors but were displayed in a cage at the Jardin d’Acclimation in Paris. They were later shown in Germany, along with about 100 other New Caledonian Kanaks and described as “cannibals”.

The phenomenon began to decline in the 1930s with changing public interest and the advent of cinema. The last “living spectacles” were Congo villagers exhibited in Belgium in 1958.

8 thoughts on “Life in a Human Zoo”